Oregon Music Hall of Fame and Muddy Award winning musician DK Stewart will be holding a CD release party for the second generation of “Olympia - Live for the Troops” at the Trails End Saloon in historic downtown Oregon City. The unique recording is a live performance that was captured during an event honoring Special Unit Troops and their families at Joint Base Lewis-McChord in Washington State. The CD will be available for sale during a night that that includes music and dancing from the DK Stewart Sextet along with special guests.

Proceeds from CD sales will be donated to charitable service organizations supporting families of active duty military personnel, such as the Madigan Foundation and NW USO.

As the 11th of September opened up as a possible date for a CD party, Stewart jumped at the chance to make a difference on this particular day. The opportunity to give back hits close to home for this bandleader and music director. A USMC combat veteran of the Vietnam War (1968-70), Stewart knows first hand how difficult it can be to transition to civilian life after serving. “The Veterans Administration has been understaffed and under funded for decades” DK explains “and without these outboard service organizations, millions of my brothers and sisters would still be in transition limbo...”.

Stewart was a classically trained pianist before enlisting, so music helped his transition home. DK ended up pursuing a career in “live ensemble” performance after his stint with the service and was lucky enough to perform with blues legends Albert Collins, BB King, Robert Cray, Curtis Salgado, Paul deLay, Roomful of Blues and many others at a relatively young age. His tenure at the keyboard reaches deeply into NW music history.

Stewart's passion is quite evident, not only for his fellow servicemen and women, but also for the music itself. The recording showcases what you would hear “live” from his powerful group and highlights some of Portland's finest blues talent. Peter Dammann; is simply magic on guitar; arranger and saxophone player Chris Mercer has played and toured with such notables as Bob Marley, The Temptations, the Pretenders and John Mayall, to name a few; chart-master and former Robert Cray trumpet player Joe McCarthy also writes and arranges for the band is a formidable vocalist; drummer Ed Pierce, a brilliant young technician and groove master, lays down a firm beat for the rhythm section; and bassist Joseph Conrad from the Rae Gordon Band and NW Etta James Tribute brings power, passion, dynamics and vocal harmonies to the stage.

The “live” CD was professionally recorded in HD as something to be privately shared, but when it became apparent that the music was something too special to be kept under wraps, producer Mark Kandianis (a life-long blues fan), worked with the band and studios to have it released again.

This CD celebration will be held at the Trails End Saloon, 1320 Main Street, Oregon City and starts at 8pm on Friday, September 11th, 2015 and will feature guitarist Alan Hagar and various other notable friends on stage.

For questions, obtain print ready photos, interview DK Stewart or any of the people involved in producing this project, please contact Brendan Stewart at NRP: 503-810-6007 or Rae Gordon at First City Solutions: 503-452-0440 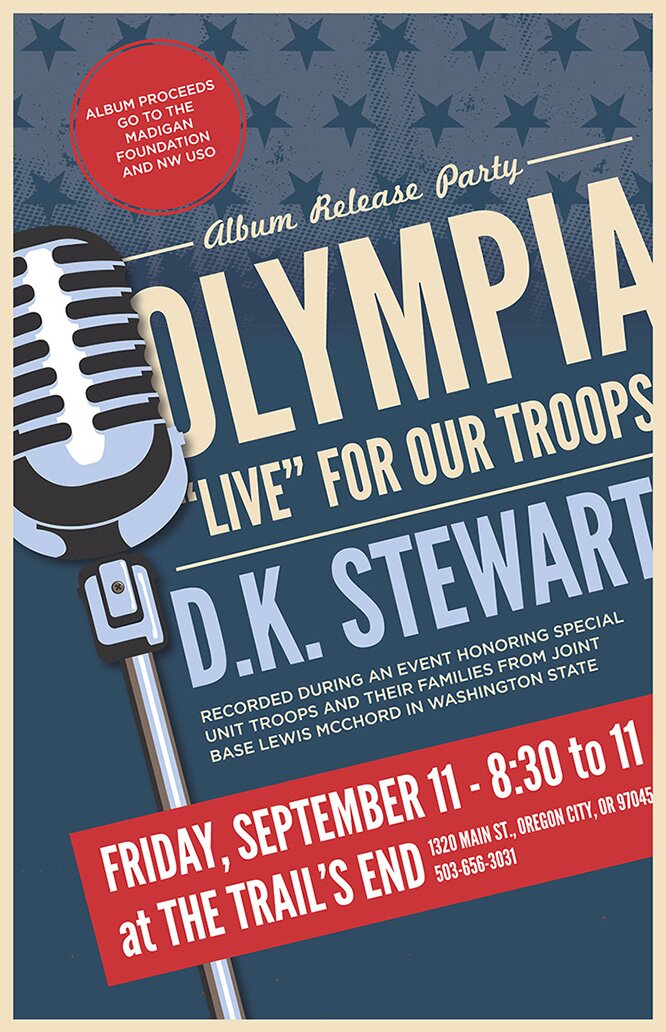